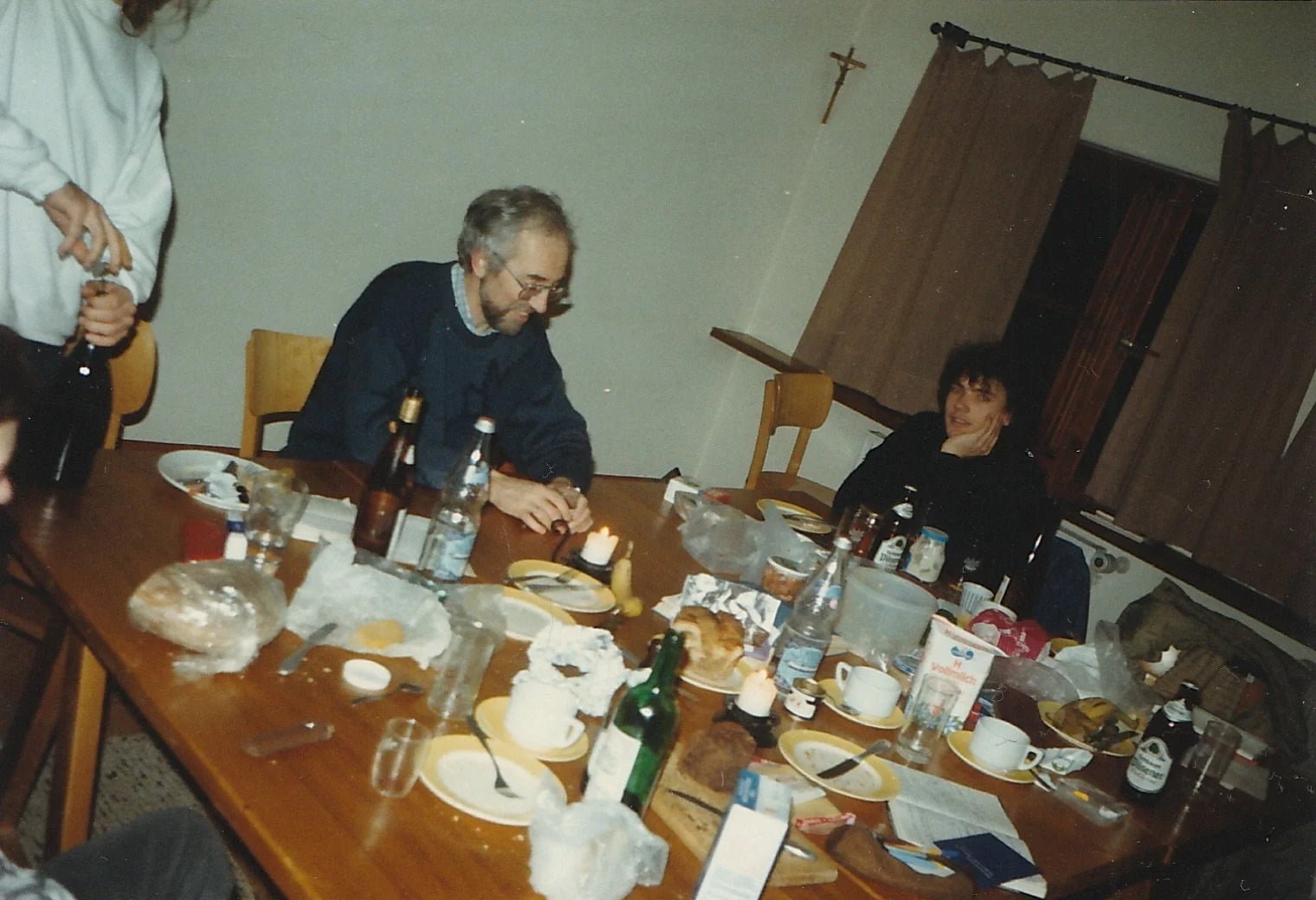 I greet the Otto Schott Gymnasium from a time when nobody knew who this Otto Schott was and people still felt quite comfortable with the abbreviation GYGO, which may seem a bit antiquarian today, and to which nobody yet attached any particular excellence. Our 80s were marked by the last hippies, who then cut off their hair and changed into white suits. When we skipped school to protest against NATO rearmament, we were reprimanded with a class-book entry: without a moralizing finger, but with the clear announcement that one must also bear the consequences for one’s actions. The hippies also became small capitalists with green “anti-nuclear” stickers back then.

A characteristic saying for the time was, among other things: “If the popper lies dead in the cellar, the punk was faster again”. Today’s Lord Mayor Michael Ebling was also one of the poppers, at least visually, whose daily utensil, a briefcase, already spoke of his later ambitions. When a certain rhetorical talent of mine became apparent in the SMV, I was accordingly recruited both by the Socialist German Workers’ Youth and by the above-mentioned Michael Ebling, who was then chairman of the “Marxists in the SPD”.

In order not to let these late revolutionary blossoms flourish too far, we still had some conservative teachers including the principal, who admittedly always had to hold their own in a school where most teachers came directly from demonstrations with “Ho Chi Minh” shouts against the Vietnam War into government service and began their march through the institutions.

Conservative at that time meant clear principles, characterized by responsibility and Christian ethics. Interestingly, these teachers were the most remembered: for example, my neighbor Mr. OStr Karrasch, an angular East Prussian with a sardonic laugh behind his strong, eye-multiplying glasses. We stood two and two in line in front of the classroom, quietly going to our seats. Then followed the “Good morning!” of Mr. Karrasch. We answered still standing and in a straight posture “Good morning, Mr. Karrasch!” and sat down only after his redeeming word “Sit” came.

There was also Mr. Wetterling, responsible for social studies, who in his brown suit smugly joked: “Brown is my favorite color” and above all Mr. Kalinowski, who, quite flowery and elegant in his body language, suggested to me early on that I should go to the CV for a political career. In class, he motivated us through French songs and the interpretation of metaphors: “Qu’est ce que ca veut dire ? Climb the scale with the lady ? Please explain!”

Mr. Gassebner did not belong to any clear political spectrum: he was such a formative personality in German and philosophy that I still know former classmates today who use his sentences to explain life to themselves. This anecdote provides a glimpse into the social reality of the time: On the occasion of our student exchange with France, my parents received a call from our French teacher with the urgent request whether we, as a well-known Francophile family, could take in another student. What it was all about was explained when my father and I went to a classmate’s house in Zwerchallee. At that time the residential area with the worst reputation in Mainz, we came through the stairwell into the apartment of my classmate. Shouting voices led us in the right direction. The parents scurrying around the apartment in fine rib underwear, the stench of stale canned beer clearly evident, we took the frightened French girl in and thus transferred her from the proletarian to the bourgeois alcoholic household.

This small difference meant that my classmate, although highly gifted, soon had to leave school, while I was able to graduate from high school without any problems. At that time, one could already see what would one day become of the Green movement. When I made fun of the Lerchenberg row-house existences with their Golfs and green consciences in my 1988 Abitur speech, I received correspondingly benevolent reactions from the conservative-bourgeois teachers and a bashful-dull reaction from the teachers who wanted to shape us in a so-called left-liberal way.

How far off this liberality was, could be seen especially in OStr Kretschmer, who was of course a biology teacher and former smoker, who acted with the vehemence of a Maoist student group against all smoking students. He then gave us his alternative diet during a weekend in Winterburg: garlic in every meal, from morning to night, so that on the following Monday the other teachers fled the room one by one from the stench, only to land directly in the arms of our German teacher, Mrs. Drewing, who walked through the hallway like a feminist Joan of Arc, visible from afar, with her flowing purple cape.

The lazy ones in the college, who somehow all got promoted even though some of them were sick more than half the time, we’d rather pass over here. We would rather talk about the many AGs that we had: Italian, philosophy, Chinese, violin lessons and the high quality of the choirs and orchestras. Unforgotten Georg Hartrath, conductor of the school orchestra, who by his departure to Paris made us painfully aware of how important a good conductor is for an orchestra. What Mr. Hartrath was for the orchestra, Mr. Brühl was for the choir.

1.The most beautiful thing that school can offer is challenge and resistance through the power of personality.

2.Tolerance is often just an excuse for laziness.

Or as the old white man Charles Bukowski once said:

3. “if you’re going to try, go all the way. otherwise, don’t even start. do it. all the way you will ride life straight to perfect laughter, its the only good fight there is.”