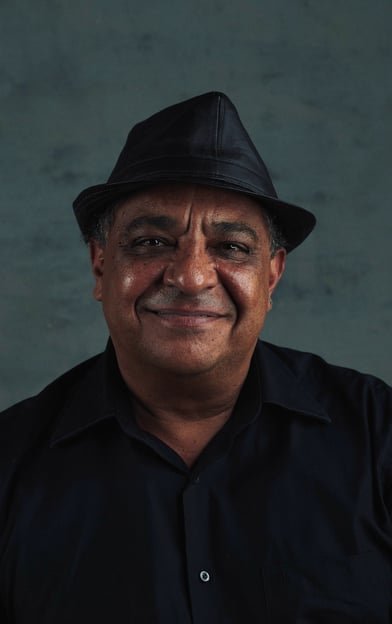 Dalma Lima was born in 1962 in Feira de Santana-Bahia/Brazil. In 1975 he began his career with Diorgens Magalhães in Jazz Dance, Tap Dance, and African Dance. With Pamela Richarson he learned classical ballet, modern dance and creating choreographies.

From 1981 to 1986 he performed his own dance choreographies in various cities in Brazil, such as Rio de Janeiro, São Paulo, North and South Brazil.

With the group ” Frutos Tropicais”, founded in 1979 in Salvador-Bahia, which sought a connection between different dance styles such as Afro-Brazilian dance, jazz, modern dance and pantomime, Dalmá Lima was on tour throughout Brazil. On the side, he gave dance classes. He also worked in the school sector in the project ” Dance in School”, which he successfully carried out in elementary and high schools. He was involved in various seminars and congresses for the preservation of music and dance.

In 1980, together with the musician and musicologist Bira Reis, he founded the “Oficina de Investigação Musical”, an institution that is at the same time a music school, library and instrument making workshop. The school is also visited by many musicologists from South and Central America, Europe and the United States because of its interesting attempts to reproduce traditional African and Indian instruments and to produce musical compositions with them.

In 1981 he participated in the 1st Instrumental Music Festival in Salvador/ Bahia. There he collaborated with various other percussionists from the north of Brazil, and other festivals with the group ” Ilú – Batá”, which he founded together with Bira Reis, already mentioned above. In the ” Oficina de Investigação Musical” Dalmá Lima got to know a musical world in which he very quickly became one of the most successful musicians. He also regularly participated in international percussion workshops.

In 1988 he played with “Ilú-Batá” at the ” Conferencia international dos Artitas” in Salvador, where the Consul for African Culture and International Artists Babatundi Olatundi also performed.

Since 1988 Dalmá Lima developed his work in Germany with Samba, Samba-Reggae, Salsa and Rumbas and above all with the rhythms of Candomblés – Afro-Brazilian religion, and gives lessons in Afro-Brazilian dance as well as rhythm and dance improvisation courses for children.

Dalmá Lima has lived in Germany since 1988 and works as a percussionist and dance teacher.

In the 90s he founded the band ” Caipora” with the musician Toninho dos Santos, playing Afro-Brasil jazz. Dalmá also played with the well-known duo ” Rosana & Zélia” for several years.

In 2000 he played with the Italian pop star “Eros Ramazotti” at “Wetten Dass”, “Bambi” and “Nobel Prize” in Oslo. He also played with other bands and artists such as Joy Denalane, Marla Glen, Joe Whitney and the Weather Girls, Phil Colliins, Marshall & Alexander. Translated with www.DeepL.com/Translator (free version)